Manchester United are set to complete the signing of Jadon Sancho on a five-year contract, sparking discussions over how Ole Gunnar Solskjaer might choose to pick his team next season.

The Norwegian manager has targeted a move for the former Manchester City winger since last year and many might argue that he is the missing piece in Solskjaer’s attacking puzzle.

The right-wing position has been a cause for concern for several years, with the club failing to address the situation since Antonio Valencia’s demotion to right-back.

But having seemingly completed a deal to sign Sancho, how might Manchester United look next season? Mason Greenwood occupied the position for large parts of last season but the 19-year-old’s future is likely down the middle, rather than on either flank.

Bruno Fernandes and Marcus Rashford are near immovable objects in their positions – the pair were Manchester United’s two top scorers last season and also the best at providing. Both players notched up double figures in both categories and are unlikely to be dropped for anyone in the squad. 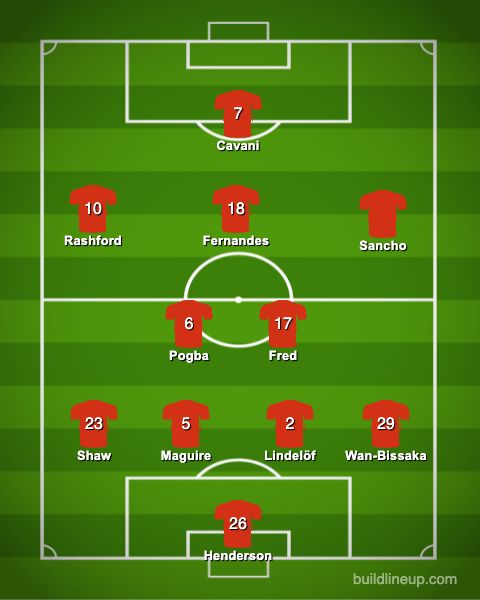 Sancho is likely to take up the position on the right side, with Mason Greenwood and Edinson Cavani expected to share responsibilities at the top end of the pitch. Anthony Martial is also an option in that position but could be moved back to the left-wing to add cover.

As of the time of writing, Manchester United are yet to make any other signings – the defence is expected to largely stay the same but according to reports, the club will now ‘go all out’ for a centre-back after completing the deal to sign Jadon Sancho.

Dean Henderson was Ole Gunnar Solskjaer’s preferred goalkeeper towards the end of last season and is likely to keep his place, despite David de Gea’s Europa League final appearance.