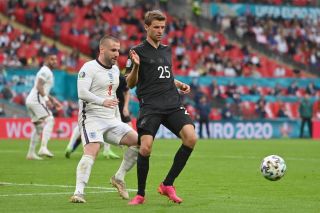 Rio Ferdinand has come to Luke Shaw’s defence after criticism from Jose Mourinho. Shaw, who has been preferred to Ben Chilwell this summer, was one of England’s key players as he was involved in both goals as England beat Germany 2-0 on Tuesday evening.

The 25-year-old provided the assist for Raheem Sterling’s breakthrough goal, before winning the ball in the move which sealed England’s progression to the next round.

Rio Ferdinand has now come to the defence of Shaw after Jose Mourinho had criticized him for his part in England’s 0-0 draw with Scotland.

“I don’t get it, man. Jose Mourinho, look at what he is. The guy, the main man, I love Mourinho. He’s a manager I would have loved to play for. But leave the kid alone,” Ferdinand told FIVE.

“It feels a bit personal to me. One of the main things I said when I started this any type of appraisal, or breaking down a situation or a club it can’t be personal.”

“I think Jose, you can tell there’s a bit of bitterness about it. Luke doing well doesn’t reflect well on Jose Mourinho. That’s the problem and where the bitterness probably stems from.”

The criticism was the latest attack from Mourinho on Shaw, having continuously picked on the player when the pair were at the club together. Shaw, who withstood fierce public scrutiny as a result, was revitalized by the appointment of Ole Gunnar Solskjaer and is now a key player for both club and country.

With two years remaining on his contract, it is fair to believe that the club will enter contract negotiations with the former Southampton defender over a new deal.