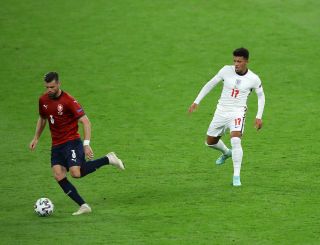 Alf-Inge Haaland, the father of Dortmund sensation Erling Haaland, has reacted to the news that Jadon Sancho is set to join Manchester United on a five-year deal. The former Manchester City player is believed to be heavily invested in how Borussia Dortmund fare and has now wished Sancho good luck ahead of the move.

News broke on Wednesday evening that Manchester United and Borussia Dortmund had reached an agreement over the €90m transfer of Sancho, sparking reactions from supporters and spectators.

Alf-Inge Haaland, who has his own history with Manchester United after that infamous tackle from Roy Keane, reacted to a tweet from Fabrizio Romano in disappointment.

Fuck. 🐝 But all the best @Sanchooo10 You will be missed.

“F***. But all the best (Sancho), you will be missed,” Haaland wrote on the social channel.

Jadon Sancho is now expected to complete a move to Manchester United when his involvement in this summer’s European Championship ends, with a medical believed to take place subsequently.

Read more: What Manchester United could look like next season with Jadon Sancho