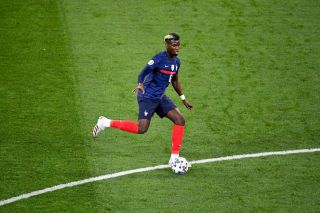 I watched France closely this summer — utterly baffled at how people have got nothing better to do than complain about Paul Pogba.

I’ve been his biggest critic in the past, but credit when it’s due…

As far I’m considered, prior to France being eliminated on Sunday night, Pogba was the complete midfielder at Euro 2020. It might go unnoticed now that the world champions crashed out early, with their campaign ending in disappointment following an upset at the hands of Switzerland.

Stats from Opta back that up.

As you can see below, in the tweet shared by @OptaJean, the French midfielder was one of the stand-out performers this summer. You could argue it works out in United’s favour — with France out, Pogba has the rest of the summer to wind down and relax.

🏅 33 duels won, more than any other player

🏅 9 through balls, more than any other player

The Manchester United midfielder won 33 duels — more than any other player.

Pogba also won 11 fouls and managed 9 through balls, again more than any other player at this stage of the tournament.

France getting knocked out isn’t the only shock, though. Reigning champions Portugal fell flat on their face after failing to respond to Thorgan Hazard’s screamer as Belgium qualified for the quarter-finals.