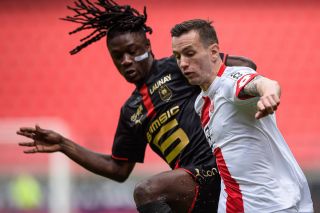 Manchester United, like many clubs, are interested in Eduardo Camavinga. We caught up with Fabrizio Romano to get the latest on the French youngster being heavily linked with a move to the Premier League and beyond.

RMC revealed last month that Camavinga had been earmarked by United as a top priority for this transfer window, but after several conversations with clued in people I don’t see us making a move to sign the midfielder in the coming weeks or even months.

The 18-year-old is one of the most talented youngsters in world football right now, so you can see why clubs like Manchester United would be interested. And with just one year left on his contract there’s an opportunity to sign him on a Bosman.

Camavinga’s performances in Ligue 1 last season have attracted the attention of United and PSG.

First, I asked Romano if Camavinga coming in could mean Paul Pogba out. He told the Strettycast: “I won’t link the outcome of Camavinga and Paul Pogba. They are two different situations.

“Manchester United are interested in him. They like the player but are in no rush to sign Camavinga in the coming days or weeks. Camavinga is in no rush because he has a year left on his contract and many clubs want him. We are talking about a top target, so keep an eye out for PSG too. It’s still an open situation without any advanced negotiations.”

It sounds like United are putting this one on the long finger for now. The player’s contract expires soon and he could be bargain of the summer in 12 months’ time.

Another player who doesn’t know what the future holds is Jesse Lingard.

He was overlooked by England despite a cracking second half of the season with West Ham and Fabrizio rules out a move abroad for the playmaker.

“From what I heard, it’s a matter of staying at Manchester United or joining West Ham for Lingard,” Romano added. “I don’t see him leaving for another club because he was great at West Ham. Otherwise he will need to sort his contract out with United.

“From what I know, they have a meeting scheduled so we’ll see what happens in the next days or weeks. I don’t see him moving to other clubs.”