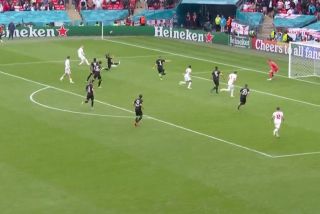 The best left-back in England provided Raheem Sterling with a wonderful assist as England took the lead over Germany.

Man City’s Raheem Sterling opened the scoring as Wembley went wild. It’s been loud and great to see so many fans back inside a football stadium.

England substitute Jack Grealish played a ball out wide to Shaw, who sent a low cross in towards Sterling before England went 1-0 up.

England have one foot in the quarter-finals.