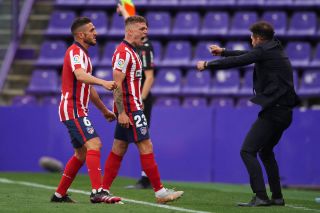 Atletico Madrid’s Kieran Trippier wants to join Manchester United this summer but Diogo Dalot has been told to report for pre-season training.

I would imagine most players have been told to report for pre-season training (via Manchester Evening News), unless their contracts have expired, with Dalot likely to find out what plans Ole Gunnar Solskjaer has for him in the coming weeks.

While there has been reported interest since the end of last season, Manchester United have not made any progress in a possible move for Trippier as they consider full-back options for next season. Aaron Wan-Bissaka could do with competition and I think the manager needs to have another, more attack-minded option at right-back.

However, on the latest episode of the Strettycast, Fabrizio Romano explains Atletico want €40m for Trippier but he is also interested to see what happens with Diogo Dalot after returning from his loan spell at AC Milan.

Kieran Trippier: “From what I am told, the player [Trippier] is so respectful. He loves the city, he loves the club, he loves Simeone, so he is okay at Atletico Madrid. But if he has the chance to leave the club and go back to England, he would be happy too so the player is really open and he’s a great professional.

“The position of Atletico Madrid is they don’t need to sell. They always act like this because they don’t need money, so only if the right club offers the right money they will sell. For Trippier, they want around €40 million.

“The first opening bid from Manchester United was around €12-13m just to open talks. But they want a huge fee for Kieran Trippier or the player stays. Let’s see if this position will change throughout the summer.

“For sure, Manchester United are interested but I am curious to see what happens when we talk about right backs for United — also with Diogo Dalot because he is doing so well. He was so good also with Portugal against Belgium and had a great season with AC Milan playing left-back and right-back. Always available, always so serious. He’s so young. I am curious to see what happens with Diogo Dalot – if he leaves or stays — and Kieran Trippier.”

Romano continued to make it clear he is a fan of Dalot after watching him in Italy last season: “He was on loan but he wants to feel important. It’s not just about the club but the formula — if they want to sign him permanently or not. He needs to play because he is young, improving and prepared to play for important clubs like Manchester United. I like this player. I think Diogo Dalot is really really good and sometimes underrated.

“Manchester United are not accepting a simple loan option. They want something different.”