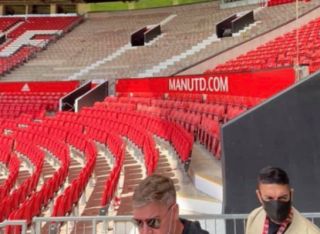 Work has begun at Old Trafford to install 1,500 rail seats ahead of a trial.

Manchester United initially received approval from Trafford Council ahead of last season for rail seating, only for the pandemic to put things on hold. We can only hope there won’t be a repeat of that during the 2021/22 campaign.

Barrier seats have been placed in the old J Stand section of the ground — and fans’ forum member Ian Sterling shared the first picture of work being done earlier today.

After a long campaign, the installation of Rail seats has started at Old Trafford. This is a trial in J stand but we will work for rail seats to be rolled out where there’s demand. pic.twitter.com/t81fu39jET

In a previous fans’ forum, held on April 16, the club confirmed they would have the rail seats installed this summer.

Is this the start of safe standing at Old Trafford? A campaign fans have been fighting for years.

2 responses to “Photo: First glimpse of rail seating at Old Trafford ahead of trial next season”