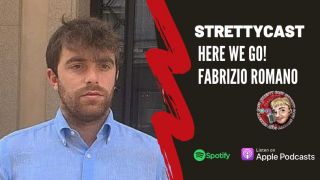 We are delighted to announce Fabrizio Romano as a guest on the Strettycast!

The Italian football journalist joins me for a run down on everything Manchester United in the transfer market.

Manchester United are still in the process of completing a deal to sign Jadon Sancho from Borussia Dortmund and reports suggest they will quickly turn their attention to signing a centre-back next.

Paul Pogba’s future remains up in the air but United’s stance is clear.

Romano has been providing updates on some of these stories for over a year — such as Sancho and Pogba — and he gave us the latest on both situations.

Another player United are strongly linked to is Atletico Madrid right-back Kieran Trippier. Romano understands the player would like to join United this summer but it’s complicated.

We also chat about Eduardo Camavinga, who has been heavily linked with a move this summer. His contract expires at Rennes next summer and United could see that as a potential bargain down the line.