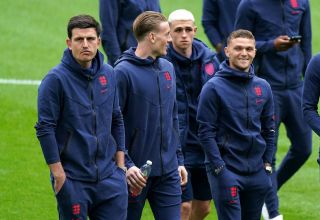 England manager Gareth Southgate has told the BBC why he named a back five for England, including Manchester United duo Luke Shaw and Harry Maguire, all while sacrificing one of his attacking players.

I don’t blame Southgate for being cautious against Germany – but he has been cautious since the beginning of the tournament. Where has everyone gone from talking about a young vibrant side full of goals?

“The teams Germany have played have had big problems with overload of wing backs,” Southgate said before kick-off, as per MEN. “We’ve got to cause them problems with our system, the focus has been with the ball as much as without the ball.”

The fact Southgate feels the need to mention the possession gripe because England have been a very conservative throughout the tournament.

On selecting Bukayo Saka ahead of Marcus Rashford and Jadon Sancho, Southgate added: “There’s a bit of what he did in the last game, and the games and training we’ve seen.

“Speed is important in behind the Germany defence, is something we feel we’ve got. Our movement upfront has to be good enough to move Germany’s defence around a bit.”