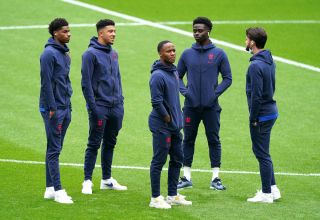 At long last it seems like Jadon Sancho is on the verge of becoming a Manchester United player.

Sport 1 journalist Patrick Berger took to Twitter this evening to provide the latest information he has been given on Jadon Sancho’s transfer saga.

It appears as though it took three bids to finally crack the nut for BVB to agree.

Hopefully this is the end to what feels like years of negotiations. With the clubs set to agree on a price, the only thing I see stopping the deal from being completed is the player having a medical (unsure if that is possible as long as England compete at Euro 2020).

The word coming from Germany is that ‘good talks’ have been held between United and Dortmund – with the final negotiations to take place over add-ons and payment structure.

Jadon Sancho is on the bench for England’s last-16 clash against Germany (kick-off 5pm).

Your #ThreeLions to face Germany in the Round of 16 at #EURO2020… 👊 pic.twitter.com/ZkAgOcGOFz

Fear not though as soon he will be at United – where he will be appreciated and let flourish into a better player.