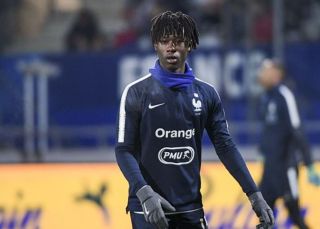 It was revealed on Sunday morning that Manchester United had entered into talks with Eduardo Camavinga’s entourage, but Rennes sporting director Florian Maurice has now denied reports that an official has been lodged for the 18-year-old.

Camavinga is hot property this summer and with just one year remaining on his current deal at Rennes, Europe’s elite clubs are lining up to complete a sensational swoop for the midfield talent.

Maurice opened the door to a possible sale of Camavinga, but insisted that the club is not in a hurry to make a decision and will wait until talks with the player have been held.

“With a player who has one year left of his contract we either find a way to extend him and that gives us a bit of time, or tomorrow a club has interest in Eduardo and we will think about the offers we might have. We are not under any obligation to sell the player,” Maurice told TV Rennes, via Get French Football News.

“No. There are certainly clubs who want Eduardo, but he has a price too and we will have to find an agreement on that level too,” Maurice added when quizzed on reports of an official bid were true.

Camavinga has been capped three times by France on senior level and has been tipped to become a mainstay for Les Bleus in years to come, despite overcoming a difficult season with Rennes in Ligue 1.

The midfielder’s deteriorating performances saw him lose his place temporarily but was eventually reinstated after an upturn in form.