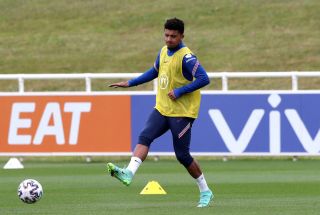 Sancho, 21, has been heavily linked with a mega-money transfer to Manchester United this summer but has played just six minutes if the Euro 2020 finals to date, as a late substitute in the 1-0 win over Czech Republic.

His lack of game time has been a surprise to some, especially the German media, who rate him as one of the best footballers in the Bundesliga. That’s incredible when you consider he is just 21-years-old.

The Borussia Dortmund winger has had to be patient and nobody is really expecting him to feature against Germany, but Rashford sees it differently because Sancho has played with and against a large number of their squad domestically.

When asked if Sancho could be Gareth Southgate’s most valuable asset versus Germany, Rashford said (via The Independent): “In a way, yes, because he’s played a lot of football against them, more than the rest of us.

“I’m sure he knows the players, their characteristics, strengths and weaknesses and he’s definitely someone that can exploit them.

“If one thing doesn’t quite work we have a big opportunity to change things and adapt in the game.

“Adaptability is one of the biggest skills in football and there’s a lot of times in a game where you have to change or tweak something slightly to hurt your opponents.

“The fact that he’s played against them a lot, he’s hurt them a lot as well, it will be a big factor for us.”

It would be great to see Sancho in action in such a big game tomorrow night but I’m not getting my hopes up. Plus, it’s a blessing in disguise for United — we’re taking on a star the English under-appreciate.

Pretty sure we’ve been here before.