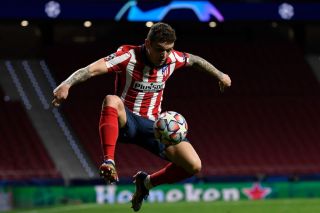 Manchester United have not progressed in a deal to bring Kieran Trippier back to the Premier League, according to reports. The former Tottenham and Manchester City right-back is reportedly a target for the club but a transfer is not thought to be imminent.

The 30-year-old was a surprise target going into the window considering Aaron Wan-Bissaka’s strong season but after reports of Solskjaer wanting an able backup, the club was said to be monitoring Trippier.

A move, however, seems to have stalled and according to the Manchester Evening News, the club ‘have made no headway’ in discussions to bring Trippier to Old Trafford.

The report claims that despite interest from United and efforts from the Atletico Madrid defender to find a home in England, the club is concentrating on completing a deal for Jadon Sancho and a centre-back, with talks over Varane reportedly progressing.

Should Trippier, La Liga champion last year, join the club, it is likely that Solskjaer will be seeking a similar impact to the one Alex Telles had on Luke Shaw last year.