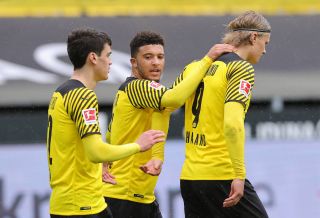 Manchester United are expected to formally agree the transfer of Jadon Sancho from Borussia Dortmund this week, according to reports.

The Telegraph (£) claim that Borussia Dortmund are monitoring PSV Eindhoven star Noni Madueke as a potential replacement for the departing Sancho, who is currently with England at Euro 2020.

It is also reported that a deal worth at least £77.4m will see the 21-year-old winger sign a contract worth more than £250,000-a-week, with bonuses added to the valuation.

However, a lot could depend on what happened between England and Germany tomorrow evening, with The Telegraph insisting that the transfer will not be officially announced until Gareth Southgate’s Euro 2020 campaign comes to an end.

Ole Gunnar Solskjaer wanted Sancho a year ago but the club never looked like getting their man due to BVB’s valuation back then, so sections of fans are bound to be annoyed by how long they’ve had to wait.

I can imagine Solskjaer feels the same.