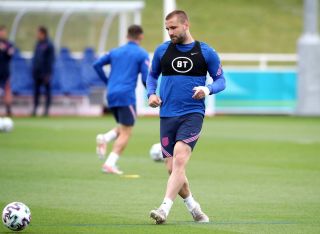 Luke Shaw has hit back at his former manager Jose Mourinho after yet more criticism was sent his way from the current AS Roma boss.

The England international enjoyed a superb season at Old Trafford and is now a key player for his national team, featuring as a starter at Euro 2020 despite having a hard time when he was working under Mourinho.

Mourinho often went public with his criticisms of Shaw and this was after the player returned from a serious leg break which threatened his career. Thankfully under Ole Gunnar Solskjaer, he found his way and has become the best left-back in the Premier League.

Responding to the criticism, as per BBC Sport, Shaw did not hold back as he mocked Mourinho for being obsessed with him.

“Clearly I am in his head a lot and he clearly thinks about me a lot,” the 25-year-old said.

“There is no hiding that we didn’t get on.

“I think he was a brilliant manager but, you know, the past is the past. It is time to move on. I am trying to move on but, obviously, he can’t.

“He continuously talks about me, which I find quite strange. Even some of the lads have said ‘what’s his problem?’ and ‘why does he keep talking?’ He just needs to move on.

“What he says now is nothing compared to how it used to be if I am being totally honest.

“I am so past it now. I have grown up a lot. The three years I had with him, I learnt a lot. I find it easy to ignore him now and even laugh about it. But it’s better just to ignore it and move on with my life.”

Shaw went from strength to strength under Solskjaer because he finally has a manager who believes in him. Gareth Southgate can see that too and he only missed the first game of the European Championships when Kieran Trippier started on the left.

Read more: Manchester United star set to miss Euro 2020 round of 16 with injury