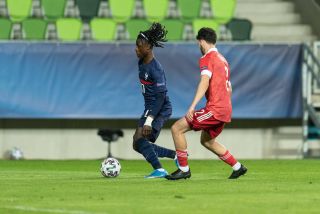 It was revealed on Sunday that Manchester United had made a move for Rennes midfielder Eduardo Camavinga but despite the 18-year-old having just one year remaining on his contract, some reports were citing a €100m demand from the French club.

Camavinga is one of Europe’s most highly rated young midfielders and is reportedly a target for Europe’s leading clubs but few are expected to commit to a nine-figure transfer sum for a player available on a free transfer next summer.

The initial report from RMC, as linked above, claimed that Rennes were adamant about demanding €100m for a transfer, but Manchester United have been handed a boost after suggestions that the stance is a negotiation ploy.

That’s according to reliable journalist Mohamed Bouhafsi, who responded to a fan on Twitter asking about the surprising news. The French football expert eased fears and insisted that the figure is just a tactic in negotiations, rather than an expectation from Rennes.

Camavinga, 18, has already been capped three times by France and is tipped to dominate the Les Bleus midfield for many years to come and is seen, domestically, as the most natural heir to N’Golo Kanté.