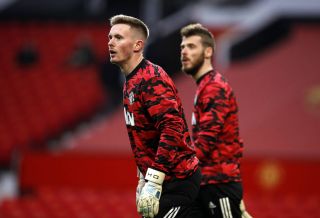 Manchester United goalkeeper David de Gea is set for a tumultuous summer amid speculation that Dean Henderson has usurped him as the first-choice at the club. Henderson was preferred to De Gea in league games since March, but the Spaniard was given the nod in the Europa League final against Villareal.

The 30-year-old has been the subject of criticism recently, having also lost his place as Spain’s recognized first choice. Athletic Club goalkeeper, who made his debut only last year, is considered to be the undisputed go-to man between the goalposts.

Journalist and transfer specialist Fabrizio Romano has provided an update on the situation, insisting that there are no talks over a move at the moment and that De Gea’s high wages could prove to be a stumbling block.

“There is nothing on David De Gea at the moment, it is very quiet. It could be difficult to find a new club this summer due to his wages. A deal could be more likely next summer,” Romano told The United Stand, as seen above.

De Gea has two years remaining on his current deal at Old Trafford and is the club’s highest earner, banking a whopping £375,000 per week. The former Atletico Madrid goalkeeper is set for talks with Ole Gunnar Solskjaer this summer as he seeks clarification on his position.