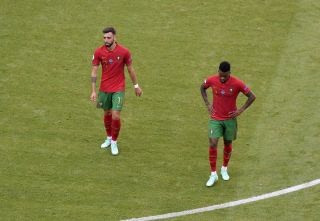 Bruno Fernandes was dropped for Portugal’s starting eleven in their 2-2 draw with France earlier this week. The 26-year-old had previously been one of his side’s most important players but has endured a tough tournament so far.

Fernandes started both of their first two matches but was hauled off their 4-2 loss against Germany after roughly an hour, before being restricted to a 15-minute appearance off the bench in their final group game.

Portugal coach, Fernando Santo, has shed some light on the situation, insisting that the decision to drop Manchester United’s talisman was a tactical one.

“Last match, we changed some things but because we felt that thinking of the opponent, but not just that, and about ourselves,” Santo is quoted as saying by the Manchester Evening News.

“We wanted to establish our own pattern. I wanted to bring in new blood to the midfield section. (Against Belgium), I don’t think that will be an issue because we have had plenty of rest over the past four days.”

Portugal will face Belgium, ranked number one in the world, in the round of 16. Fernandes will be hoping to be named in the starting eleven, having missed out on the 2016 campaign.