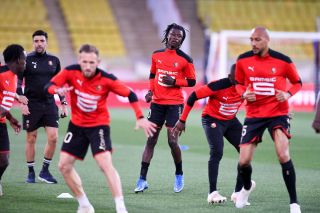 Manchester United are said to be weighing up an approach for Rennes midfielder Eduardo Camavinga once they complete the signing of Jadon Sancho from Borussia Dortmund.

Sancho’s switch is expected to be completed in the coming days as Manchester United and Borussia Dortmund discuss fee structure and add-ons.

The Daily Mail suggest United will move their attention to adding a central midfielder and centre back, with Camavinga considered as one of the best young midfielders in Europe.

At 18, he has already been capped three times by France, scoring on his first start against Ukraine. It’s time to ask questions now with one year left on his current deal at Rennes.

The story suggests United have been alerted to the fact Rennes are willong to cash in now rather than risk him leaving on a Bosman in 12-months’ time.

PSG, Real Madrid and Arsenal are also said to be tracking the player.

The Angola-born midfielder made his debut for Rennes at 16.