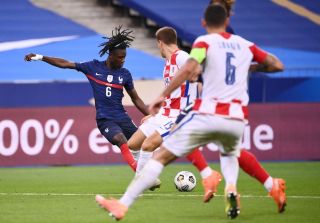 Manchester United are set to have a meeting with Eduardo Camavinga’s entourage, according to reports. The 18-year-old is one of the highest-rated young midfielders on the planet and has just one year remaining on his contract with Rennes.

That’s according to RMC Sport, via Get French Football News, who say that formal interest has been expressed and that Camavinga has been made a priority this summer.

The publication also claims that talks between Manchester United and Camavinga’s entourage have already begun and that a formal meeting is set to take place next week.

🚨 Manchester United has officially expressed interest in #Camavinga 🇫🇷. Man #United will even meet his entourage next week to convince him to join United. PSG remains the priority of the player. He would like to stay in France. Free in June 2022.

Paris Saint-Germain are believed to be frontrunners for the player’s signature but have been put off by Rennes’ €100m valuation of the player, despite the teenager having just 12 months remaining on his contract.

Camavinga is said to want to extend his stay in France, rather than move abroad, and is free to leave on a free transfer next summer.