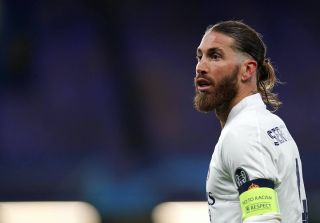 Respected French football writer believes that Sergio Ramos would be more likely to sign for Manchester United than PSG this summer.

The 35-year-old has decided to leave Real Madrid to end a 16-year stay at the Bernabeu. Whoever gets him next will be signing a defender well past his best, but one with huge experience and a winning mentality.

Both United and PSG have been credited with an initial interest in signing Ramos as they look to bolster their options at the back. He could be a replacement for Thiago Silva, who left PSG last summer and at United a lot of work is needed in the defensive department.

Harry Maguire needs a partner. Someone who can work with the England international and has enough pace not to be beaten easily by the biggest sides in Europe.

It doesn’t take a rocket scientist to work out that Ramos is not that player. Not anymore.

However, Laurens has explained why he believes that Ramos would be more likely to join United than PSG this summer – because the Reds are more in need of defensive reinforcements.

“The thing is. Manchester United need a centre-half as a starter,” he told ESPN.

“They need an improvement on [Victor] Lindelof and [Harry] Maguire.

“PSG already have Marquinhos and [Presnel] Kimpembe. So why would PSG spend so much money on a 35-year-old player who is going to be on the bench?

“There is no way he’s going to replace either of those.”

Fellow journalist Gabriele Marcotti added: “This is one thing I never get about people at this stage of their career. I have no idea how much Ramos expects to be paid for his next contract.

“If I’m Ramos, I think I can help either team (Man United or PSG) because he is still a better player. He is coming off a long injury. Something tells me neither Man United or PSG are going to give Ramos €15m net.”