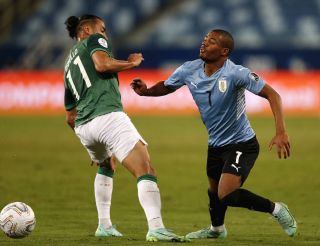 Manchester United are interested in signing one of Edinson Cavani’s international teammates, according to reports. The striker is currently playing in this summer’s Copa America, along with Nicolas De La Cruz, who has emerged as a target for the club.

The midfielder is currently plying his trade in South America for River Plate but has become a mainstay in Uruguay’s national team, prompting clubs from Europe to register their interest.

Manchester United is one of the clubs that could make a move for De La Cruz, according to TNT Sports. The publication claims that a move will be contested by Fiorentina, who are also interested in the player.

There are some complications to a potential move, however, with ownership rights not in line with Premier League regulations. De La Cruz is contracted to River Plate until December 31, 2022, but has a release clause at £16m, it is believed.

According to the report, River Plate owns just 30% of the player’s rights, with the remainder belonging to Liverpool, a club in Uruguay.