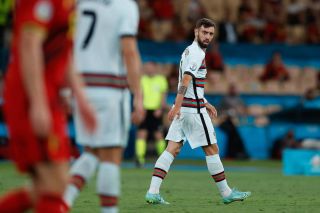 Portugal were sent crashing out of this summer’s European Championships after losing their round-of-16 tie with Belgium. The champions from 2016 dominated proceedings in the second half but failed to find a breakthrough.

Bruno Fernandes was dropped from the starting line-up for a second consecutive time, sparking outrage from fans at manager Fernando Santos, who will have won few people over after a disastrous defence of their title.

A first-half goal from Thorgan Hazard was enough to see Belgium through, and although Bruno Fernandes’ introduction energized Portugal, it was too little too late for them.

Bruno changed the game naye his haters agenda must agend 😂

Was a mistake not starting Bruno. Changed the game. Belgium lucky to go through,.

Bruno changed the game btw. Imagine if he started.

Bruno actually changed the game when he came on, Portugal would’ve won if he started.

Btw Bruno changed the dynamics of the game immediately he cane on.

What a dumb decision to drop him in the first place.

Bruno and João Felix should started. Both completely changed the texture of the game in Portugal's favour.

The 26-year-old had a positive impact on the game and contributed to Portugal’s best chances in the game but despite his greatest efforts, exits the competition at the first knock-out stage.

Fernandes, who made his 85th appearance in just over a year, is now set for a period of rest for the first time in a long time – to Ole Gunnar Solskjaer’s delight.