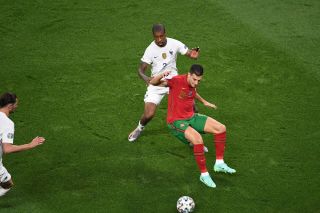 Diogo Dalot’s future at Manchester United has emerged as an enigma for the club hierarchy. Just under a year ago, Ole Gunnar Solskjaer snubbed the right-back in favour of Timothy Fosu-Mensah, who hadn’t featured for over three years.

It seemed a damning assessment of the 22-year-old, who ended up spending the next season on loan at AC Milan. Dalot enjoyed a rather successful loan spell, featuring in over half of their league games as they returned to the Champions League for the first time since 2014.

Negotiations with Atletico Madrid had taken place over the signing of Kieran Trippier, further confirming that Solskjaer wasn’t counting on Dalot, but the Spanish club’s high asking price meant that Dalot emerged as United’s pick for Wan-Bissaka’s deputy.

But now, according to Correio da Manha, via Sport Witness, there is interest from Real Madrid in Dalot. The report claims that the Madrid side sees the former Porto man as ‘an option to rejuvenate their defence’.

One response to “Not Pogba: Real Madrid register interest in Manchester United star”