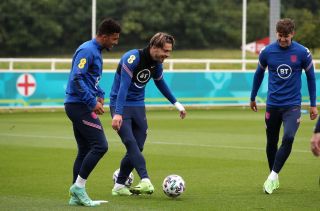 Jadon Sancho has reportedly told some of his England teammates that he’s joining Manchester United this summer. The 21-year-old is the subject of extensive interest from Manchester United and a deal is now looking likely.

It was revealed from various outlets on Friday that Manchester United and Borussia Dortmund were close to a final agreement for the transfer, potentially ending an excruciatingly long transfer saga.

And now, according to journalist Tom McDermott, the former Manchester City player has revealed to his England teammates that he’s joining Manchester United after all.

As details over a near-agreement emerged on social media, speculation over when an official announcement might come commenced. According to some reports, a deal is unlikely to be announced before Sancho’s involvement in this summer’s European Championships is over.

England take on Germany in the round of 16 on Tuesday, and should the Three Lions exit the competition, it is likely that confirmation of the move will follow swiftly.