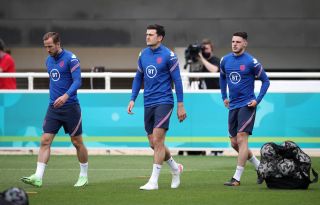 West Ham and England midfielder Declan Rice has launched a passionate defense of Harry Maguire after the defender returned from a six-week injury lay-off last week. Maguire’s involvement in this summer’s European Championships was in doubt but the 28-year-old recovered to face the Czech Republic earlier this week.

The Manchester United captained recovered from a tough start to the season and ended the campaign as one of the standout defenders in the Premier League, underlined by Rice’s comments ahead of England’s round-of-16 tie against Germany.

“He’s unbelievable. From the first time that I met Harry here, he was top – top with me and top with the lads. He’s had a tough year but I think that proves how mentally strong he actually is,” Rice is quoted as saying by the Manchester Evening News.

“From what he went through to still play games after that, he got sent off and obviously that was a tough point but we still knew how good he was. There was a lot of criticism from fans, pundits and in the media, saying is he worthy of playing for England and being Man United captain – the performance the other night (vs Czech Republic) shows you that and how he was before his injury at Man United shows you that.”

“He’s crucial – to us and to Man United. He’s a leader, he’s strong, he’s unbelievable on the ball, he plays great passes into the middle. To play against him is always really tough because you know what you’re playing against and to play with him is special.”

Maguire impressed on his return to action against Czech Republic and will be hoping to keep his place for the crucial round-of-16 tie against Germany. England have been seeded into the favourable side of the knockout brackets, with a quarter-final against either Sweden or Ukraine awaiting him if they overcome Germany.