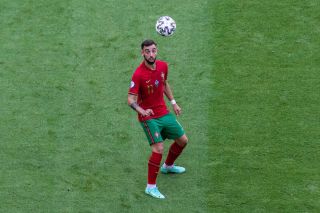 The tail end of Manchester United’s 2020/21 season was positive for some players. Mason Greenwood shone and was picked in England’s provisional Euro 2020 squad whilst Paul Pogba and Edinson Cavani stepped up and quickly became the two players the team relied on to dig them out.

But for Bruno Fernandes, after a sparkling season and breaking a handful of records, the final two months were difficult. Still, he played a key role in taking Manchester United to the Europa League final and helped guide Solskjaer’s side to a second-place finish.

But the Portuguese supremo was lacking in sharpness – that split-second decision-making he had used to his advantage for over a year. The suggestion that Fernandes is growing increasingly tired is discussed by The Athletic, revealing a shocking stat over the 26-year-old’s workload.

Since June 19 of last year, Fernandes has played 84 games for club and country. The former Sporting midfielder played in all of his side’s Premier League fixtures before the final day of the season, starting 35 of them.

After over 12 months of non-stop football, Fernandes’ slump in form also saw him drop out of Portugal’s starting team for their crunch game against France earlier this week.

So, should Ole Gunnar Solskjaer manage his workload better? Perhaps the imminent transfer of Jadon Sancho will aid a bid to rotate more.

One response to “Opinion: 84 games played – is Bruno Fernandes playing too much football?”