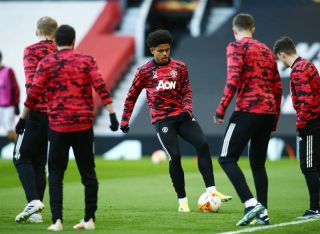 Shola Shoretire became the seventh youngster player to ever feature for Manchester United when he made his debut against Newcastle earlier this season and only the second youngest in the Premier League era.

Since his maiden appearance in February, the youngster has been used sporadically but has often been seen with the first team on matchday and is believed to be training with the senior players.

In those sessions, Juan Mata seems to have caught the eye of Shoretire, who has now praised the Spaniard as one of the cleverest players he’s seen in his short career.

“I think since I started playing football, I’ve always played at least one year up. I think that has helped me a lot because you have to learn the game quicker as I’m not one of the big ones,” Shoretire told Manchester United’s official website.

“So you have to be quite technical, I think, and I look up to Juan Mata. He’s not the tallest or the strongest but is probably one of the cleverest players I’ve seen play and played with. He is always two steps ahead. I admire him a lot.” Shoretire is expected to be involved in Manchester United’s pre-season preparations, with manager Ole Gunnar Solskjaer reportedly keen to evaluate his progress ahead of next season.

The 17-year-old wore number 74 on the back of his shirt, the highest of any Manchester United player in a competitive fixture, on his debut but will be hoping to be awarded a new number this summer.