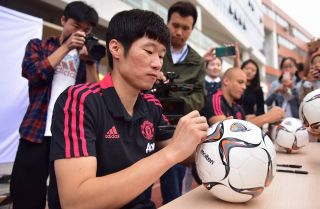 When Sir Alex Ferguson signed Park Ji-sung from PSV back in the summer of 2005 you could have forgiven the Reds faithful for having their doubts about the South Korean making the grade at the club. However, those doubts were quickly squashed as Park went on enjoy seven successful years at Old Trafford.

After signing for just £4 million, Park fast became one of Sir Alex Ferguson’s finest ever bargains.

He may not have been technically the greatest footballer to have ever graced the Old Trafford turf, but one thing he did have in his locker was work rate. No matter whether it was the first minute or the last, Park just never gave up and when it came to the big occasions he was one of the first names on Fergie’s team sheet.

Five Premier League titles, one European Cup, three League Cups, a Club World Cup and a bundle of Charity Shields rounded off a mighty impressive CV for the South Korean midfielder as Park fast become a favourite at Old Trafford.

In a squad which included the likes of Cristiano Ronaldo and Wayne Rooney, it was always going to be difficult for Park to grab the headlines but despite not been in the limelight his contribution was just as important, and without Park United were simply not the same team and I doubt United would have been quite as successful in the late 2000’s.

Park’s ability to play anywhere on the pitch also proved to be useful for Fergie and was a real key asset he brought to the team. It didn’t matter whether he was chosen to play on the wings in behind the striker central midfield or even at the back Park could do a job for the team no matter where he played and could always be relied upon.

There have been few better bargains than Park. A few million pounds won’t buy you a lower league player these days let alone a regular first team starter and when you look back and see just how good of a player Park was for United, it makes you realise just how great of a deal it actually was for United and for just £4m he will undoubtedly go down as one of Sir Alex Ferguson’s greatest ever bargains.