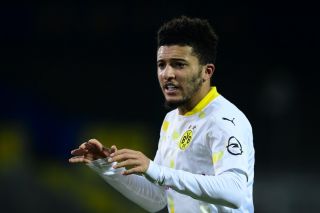 Manchester United have reached an agreement with Borussia Dortmund over the transfer of Jadon Sancho, according to reports. The winger has been heavily linked with a move to Old Trafford for over 12 months but it seems like a deal could be concluded soon.

Manchester United failed to complete a deal last summer when Dortmund’s asking price was too high, but a compromise has been reached a year later with the former Manchester City man expected to complete a move to the club.

According to The Mirror, the two clubs ‘are close’ to agreeing an £80m fee for the transfer, with £75m being paid up-front with a further £5m believed to be add-ons.

The claims are echoed by The Athletic, who also say that a conclusion to the year-long transfer saga is finally nearing. Sancho is currently preparing for England’s round-of-16 tie against Germany next week and is unlikely to complete a deal before then, but signs point to a happy ending for Manchester United.

Should the deal be completed, Sancho would become the third most expensive player in the club’s history, falling just short of Paul Pogba and Harry Maguire.