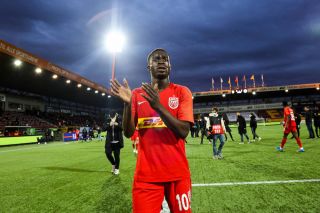 In quite extraordinary events, reports claim Manchester United are trying to hijack Ajax’s deal to sign Kamaldeen Sulemana. The youngster has been linked with a move to the club this summer but it seemed like the Amsterdam club had won the race.

But on Thursday, it was reported that despite scheduling a medical with Ajax, that Sulemana was considering an offer from Manchester United.

According to German journalist Constantin Eckner, the deal to bring Sulemana from Midtjylland to Ajax hasn’t been completed, allowing Manchester United to swoop in and potentially hijack the deal.

Kamaldeen Sulemana hasn‘t signed with Ajax yet, as his medical has been postponed. Manchester United try to hijack the deal. He is a winger with a lot of drive to the goal and great instincts. #MUFC #Ajax https://t.co/C4U6akSuoE

It would represent quite a dramatic turn of events but with attacking positions already overstaffed, is there enough space for Sulemana at the club. Regardless, should Manchester United pursue the deal, it could be a case of a player too good to pass on.

Sulemana, 19, is rated as one of Europe’s top young wingers and has already made his international debut for Ghana.