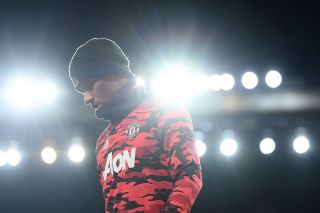 Manchester United attacker Marcus Rashford has confirmed that he is considering whether or not to undergo surgery on a long-term should injury.

However, despite the significance of the injury, the English forward has admitted he is not sure if an operation is essential.

Revealing the extend of the injury, speaking to reporters recently (as quoted by Sky Sports), Rashford said: “It’s either an operation or I don’t get an operation.

“I’m not 100 per cent sure if I need it yet, so I’ll just take it as it comes. I’ll finish strong here and I’ve got a few weeks off to just relax and decide what I’m going to do.”

Following his dwindling domestic form at the back end of last season, it’s fair to say that Rashford is likely to have been carrying the injury for quite some time.

However, continuing to play a part in England’s Euros 2020 campaign, United will be boosted by their forward’s impact from the bench in recent games.

Nevertheless, the news that Rashford is considering surgery once this summer’s international tournament comes to an end is not ideal.

However, should the forward miss the start of the new 2021-22 season, the Red Devils, who appear to be edging closer to striking a deal with Borussia Dortmund, may have a decent replacement among their ranks in the form of winger Jadon Sancho.