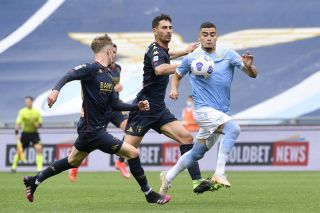 Andreas Pereira could be planning for another season on loan in Rome with Lazio.

It has been claimed that the Serie A outfit are considering extending Andreas Pereira’s loan for another season.

I don’t think anyone will be advising him to return to Old Trafford because it seems that shipped has sailed. Pereira would not get the minutes he wants in the current squad, and it says a lot that Lazio are not pushing through the door to sign the Brazil international on a permanent basis.

As reported by Italian publication TuttoMercatoWeb.com earlier today, the arrival of new manager Maurizio Sarri and the switch to a 4-3-3 formation next season benefits Pereira, who could play a key role under the former Chelsea boss.

This all comes after Pereira struggled to make any real impact under previous Lazio manager Simone Inzaghi. He still made 26 appearances for the club — more than what he would have got at United under Ole Gunnar Solskjaer, who couldn’t find enough minutes for Donny van de Beek.

But hopefully Van de Beek comes good next season because he still needs to adapt to the physicality of the English game. A lot of players have had good second seasons in the Premier League in recent years.

For Pereira, it doesn’t look like he has much of a future at United.