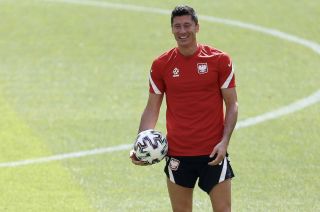 Former Manchester United player Luke Chadwick has named two players his old side should be trying to sign this summer.

While teams are gearing up for the opening of the summer transfer window, with many top players currently competing in this summer’s delayed Euros 2020, fans have been left to speculate who their side may end up pursuing.

In the case of United, all attention seems to be on finally securing the transfer of Borussia Dortmund winger Jadon Sancho.

However, with it widely accepted that a wide-attacking position is not the only area the Red Devils need to reinforce, Chadwick has become the latest big name to give his thoughts on who else the club should be targetting.

Speaking exclusively to CaughtOffside, the ex-United man said: “Without a shadow of a doubt [United should be in for Lewandowski]. The man’s record in the game is undeniable.

“It’s quite surprising after the last two seasons he’s had with Bayern that he’s looking to move, but similarly to Kane he’s not getting any younger; it might be his last opportunity to come and play in the Premier League, the best league in the world.

“I’m sure all the big hitters in the Premier League will be looking at him. He’d be a great signing for United, we’ve mentioned Haaland and Kane, but he’s the other one who’d really offer that volume of goals that are realistic targets.

“Chelsea have been linked with a few players and Tuchel’s career in Germany might give him that personal edge, but he’s certainly another number 9 who could add something to any squad, and would give United that X-factor to help them win trophies.

“If he is available I’m sure United would be interested and would try and be involved if a bidding war takes off.”

In addition to a new striker, the Red Devils have been strongly linked with bringing in a new centre-back.

Despite both La Liga stars displaying the ideal attributes to partner club captain Harry Maguire, Chadwick feels it is the commanding French defender who his old side should be going all out to land.

“If you could pick any centre half in the world to go and partner Harry Maguire it would be Varane,” Chadwick said. “He’s an absolute Rolls Royce of a player, you don’t win the amount of trophies he’s had without an incredible mentality.

“With Ramos leaving as well, Paris Saint-Germain seem to be showing an interest in both of those players, but in terms of what United need at this time, Varane would be a dream signing if they could get that over the line.

“PSG can offer more in terms of wages, but Varane’s another player who’s never played in the Premier League, so it depends if it’s the financial incentive or that playing opportunity that means more to him.”

Read more: Eric Cantona is the first to ‘Sign for United’ – MUST launch campaign to register for fan share ownership scheme