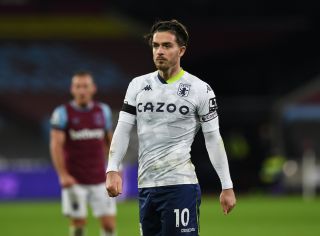 According to recent reports, Aston Villa’s hierarchy is ‘confident’ they will keep hold of star man Jack Grealish this summer, despite strong interest in the midfielder from both Manchester United and Manchester City.

That’s according to a recent report from The Athletic, who claims the club are set to fend off any approaches for their captain.

It has been widely reported over the last 12-months that United are big admirers of Grealish and often viewed as the best replacement should Paul Pogba depart, this summer could see the Red Devils launch an audacious bid for the Villa skipper.

However, it is not just the red half of Manchester who is reportedly interested in England’s number seven.

Across town rivals, City are also understood to be big fans of the 25-year-old.

However, reluctant to let their talisman go, Villa will reportedly dig their heels in and try and keep hold of their star midfielder.

CaughtOffside reported in April that Villa were poised for a bumper summer in order to convince Grealish to stay with the club – these claims have now been backed up elsewhere.