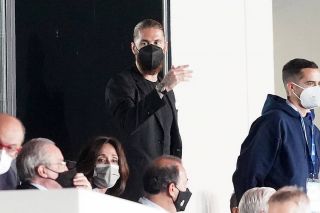 Sergio Ramos is reportedly nearing a decision on his future, with a number of offers on the table for the former Real Madrid defender to select from him.

The veteran Spain international, who missed out on a place in the squad for this summer’s Euros along with the other Spaniards at Real Madrid, is leaving the Bernabeu after 16-years.

According to AS, Ramos is learning towards a switch to Paris Saint-Germain next, but he also has offers from Manchester United and Man City on the table.

PSG missed Thiago Silva’s experience last year but Ramos would be an ideal replacement 12 months on.

I don’t think it would be a blow for United to miss out on Ramos, though. Ole Gunnar Solskjaer should be thinking long-term with Pau Torres or if he wants some experience, Raphael Varane appears to be next to edge his way out of Madrid.

Todo Fichajes previously suggested that Ramos wanted to sign for United — but I would be surprised if the feeling was mutual from United’s perspective. The Spanish defender is not what we need beside Harry Maguire for the new season.