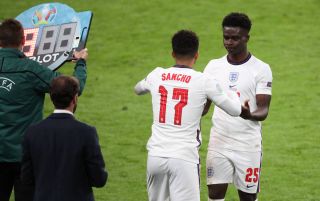 Roy Keane gave his thoughts on why Manchester United target Jadon Sancho has yet to start at this summer’s Euros.

Sancho finished the Bundesliga season in sensational form for Borussia Dortmund, scoring 16 goals and recording 20 assists in all competitions, but there’s not been many chances for the winger in Gareth Southgate’s side.

The 21-year-old made his first appearance for England at Euro 2020 against the Czech Republic of Tuesday night, making a late cameo and playing a role in a Jordan Henderson goal that was rightly ruled offside.

Fans and pundits in Germany have been left baffled at Sancho’s omission, and now former club captain Keane has had his say.

“We all follow the players what they’re doing every week for their clubs but Gareth has had three or four weeks with the players,” Keane said on ITV, as quoted by the Manchester Evening News.

“He’ll look at players’ attitude to training, particularly players that have been left out, and this is certainly a talented kid.

“What England missed the other night was extra energy and pace, people going past players and this kid will bring that.”

It feels like Sancho is already getting a taste of life as a United player — getting unfair treatment whilst away with England. We’ve only turned the page from Scholes, Neville, Beckham and Rooney.

Who from the new crop will England fans pick to blame for this summer’s inevitable shortcomings?