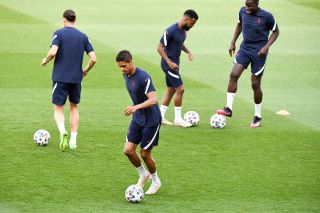 It’s looking good on the Raphael Varane front with Real Madrid increasingly resigned to losing the Frenchman this summer.

Manchester United have been long-term admirers of the Madrid centre-back. His contract expires next summer and Ole Gunnar Solskjaer knows that he needs a better partner at the back for skipper Harry Maguire, who started for England last night in a 1-0 win over the Czech Republic.

According to The Athletic, Madrid are under the impression that Varane wants to leave after he rejected an offer of a two-tear extension to his contract.

Madrid president Florentino Perez has supposedly told newly appointed manager Carlo Ancelotti that Varane could be sold if a tempting offer comes in for him this summer.

The report also outlines how Varane has attracted interest from PSG, with the Ligue 1 side linked with Sergio Ramos on a Bosman, too.

Following his switch from Lens to Real Madrid in 2011, however, Varane has won the lot (four Champions Leagues and three La Liga titles).