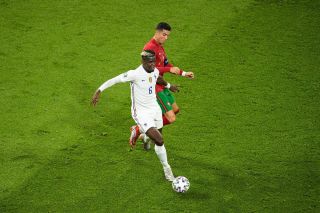 The Manchester United midfielder has continued his rich vein of form at Euro 2020, turning on the style in France’s opening three matches, but especially in the 2-2 draw with Portugal.

He showcased his terrific range of passing and set up Karim Benzema for his second goal of the night, with a pass that made Ruben Dias look ordinary in defence.

United fans were quick to praise Pogba after the match.

I've ran out of superlatives to describe Pogba, what an assist. The best in the world

Pogba is once in a generation player. Drop all the agendas and just enjoy him

Pogba is the best footballer on the planet.

Pogba is pure talent, man. A joy to watch ♥️

Pogba is running this tournament

While the club aims to keep Pogba beyond the transfer window, it’s no secret that his contract expires at the end of next season and he will be free to talk to other clubs in January.

Bruno Fernandes was named at the bench but came on in the second half.

The headlines were ultimately grabbed by Cristiano Ronaldo on the night. The former United winger struck a brace of penalties to equal Ali Daei’s record of international goals and earn his nation a draw against the world champions.

With Germany only able to draw with Hungary in Munich, France topped the so-called ‘group of death’ with 5 points.

France will play Switzerland in the next round while Portugal take on Belgium.

That means the Germans face England.