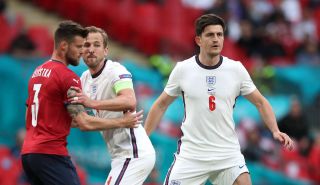 England’s management team have noticed a change in Harry Maguire since he was given the Manchester United captaincy 18 months ago.

Gareth Southgate thinks Maguire has improved as a defender and he believes that comes from the inspiration of taking over as United captain.

Maguire, 28, was handed the armband during his first season at the club and has been skipper under Ole Gunnar Solskjaer ever since.

We missed him at the end of the season due to an ankle injury, which kept him out of the Europa League final against Villarreal. The less said about that the better.

Southgate brought Maguire straight back onto the starting line-up against the Czech Republic last night and he showed that the Three Lions are better defensively when he’s available.

The England manager has noticed a change in the United defender to a point he makes the job of the England staff easier on matchday.

“We’ve noted over the last 12 months but certainly the last six months how when you become the captain of Manchester United the impact that must have on your confidence, and the improvement in his leadership and his desire to step forward and have an influence on the wider group shines through,” said Southgate, as per Manchester Evening News.

“We’ve got some really important characters in that dressing room that are doing that – not just Kane and Henderson who are the obvious ones but Maguire and you’ve got Conor Coady – captain of his club – and Kieran Trippier [who is] a really good leader.

“The dressing room doesn’t need as much voice from the coaches before a game as perhaps it did a couple of years ago. You can hear all of those players getting around each other and there are several others who add in to that. That’s a healthy environment. It’s a good sign for the team now and moving forward.”