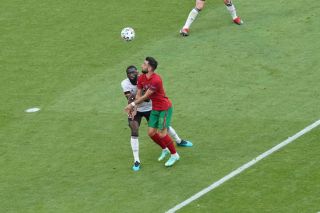 The Portugal international has pulled up trees for both club and country in recent times, but he has not been able to show his best form at this summer’s European Championships so far.

I think think we can deny that some people are judging certain top players at this summer’s Euros without fully considering the amount of football they had to play for their clubs last season. Ask any United fan and they will tell you Fernandes looked burnt out towards the end of the campaign, and was non-existent against Villarreal in our Europa League final defeat.

Fernandes’ form at the Euros led to ITV pundit and former Liverpool captain Souness criticising his body language at times, after spotting the United star waving his arms in frustration when things didn’t come off for him against Germany, as per The Metro.

It doesn’t take much to rile Souness — all you need is to have worn a Manchester United shirt or have any association with the club. Even at that, he’s always had the reputation of a bitter crank.

Souness was quoted as saying Fernandes wouldn’t last five minutes in his dressing room if he was manager. However, former United youth team graduate Chadwick has dismissed this, however, as more of a cultural issue.

Chadwick told Caught Offside that fellow Portuguese star Cristiano Ronaldo can be the same – and how it’s about expecting high standards rather than being petulant. This is clearly something Souness never appreciated during his time in football and it helps explains his ignorance on a number of topics.

“I think the reason Bruno Fernandes does that is because he’s a passionate player, and he wants the ball because he knows what he can do with it,” he said.

“You mention Graeme Souness calling it petulance, but I think that’s a bit of a British mentality, it’s not really a part of how we play football in this country. The foreign players coming to this country tend to do it more, it’s more accepted and part of the norm in their culture.

“I don’t think it would put off his team-mates at Manchester United or Portugal, it’s just about how it’s perceived by the fans and the press outside the game. That’s maybe the way the Brits look at that sort of mentality.

“I think in any elite environment, a demanding mentality is needed by everyone. He’s showing his frustration and wants standards raised to his level.

“I don’t think it’s just him, it’s the make up of players like Cristiano Ronaldo as well, who are desperate to do well. Sometimes that can spill over to frustration, but I don’t think it’s an issue in the Portugal squad or Manchester United because they’ll all want standards to be as high as they can.”

I find nowadays, I’m so over Souness and his crap, everything he says goes in one ear and out the other.