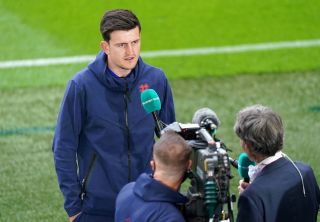 Harry Maguire returned to action for England after spending six and a half weeks out with an injury sustained playing for Manchester United against Aston Villa back in May.

The centre-back missed United’s Europa League final against Villarreal as a result, and was a missed presence considering how that night went in Gdansk.

This was before Maguire was absent for England’s first two games of the European Championships.

However, Maguire impressed in England’s win against the Czech Republic last night after returning to the starting eleven.

“I’ve been out of action for six and a half weeks now and it’s been tough,” he told BBC Radio 5Live.

“It’s been tough to watch, I don’t like watching football matches so to be back on the pitch is something I love doing, and to be at Wembley in the first time for me playing in a European Championships, it’s a good feeling and it’s all the hard work that I’ve put in that I’ve been able to play 90 minutes.

“We’ve set out to win the group and we’ve done that. Seven points, three games. Can we play better? Of course we can. Will we improve? We’ll do everything we can.

“Three clean sheets, been solid, good foundations, haven’t conceded from a set play. The fundamentals are there and now we’ve got to tidy up in every part of our game.

“I still think there’s a little bit more we can get out of each other and push each other. If we’re going progress in this tournament, we need to do that.

“In tournament football, it’s about – I know everyone wants to play well, create numerous chances, but teams are well-drilled and well-organised – but big moments in big games and not giving the opponents big moments to score from and at the moment we are doing that well.

“It’s not all perfect and we can improve but you can’t argue with seven points from three games. It’s great from the lads. The pressure was on to win the group and we’ve managed to do that. Now it’s to look forward to the knockouts and keep striving to improve.”

We published a piece last night about Maguire’s importance to the England side, and Gareth Southgate spoke about how becoming captain in his first season at United helped bring the best out of him.

Tyrone Mings has performed exceptionally and he’s unlucky to miss out. But it’s clear whenever Southgate talks, he has a favourite in Maguire.