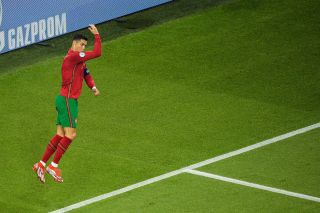 The Portuguese star and former Manchester United prodigy matched Iranian great Ali Daei’s all-time international goal record of 109 with brace against France tonight – both goals were from the penalty spot.

His record-tying goal came nearly half an hour after the first. Ronaldo did not hesitate to walk to the spot to take it a second time and he sent it home calmly.

Just 19 of Ronaldo’s 109 international goals have come in friendlies.

However, it is Sweden and Lithuania who suffered the most when it came to Ronaldo’s goalscoring spree on the international stage, scoring seven apiece against the two nations throughout his career.

Former Real Madrid team-mate Karim Benzema also scored two goals on the night – managing to get on the scoresheet in a France shirt for the first time since 2015.

Congrats to Ronaldo on the achievement. It won’t be long before he hits 110!

United star Bruno Fernandes started the match from the bench.