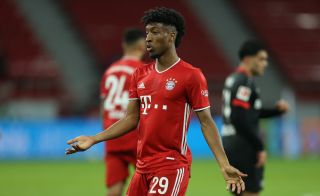 Manchester United are reportedly keeping their options open in case a deal for Jadon Sancho collapses and according to new reports, a source at the club has dubbed Bayern Munich star Kingsley Coman as “very talented”.

The French winger has been linked with a move to Old Trafford in the past but with two years remaining on his current deal, this summer’s transfer window could represent the most realistic time to sign him.

Coman, who has won eight straight league titles with Paris Saint-Germain, Juventus and Bayern Munich, is a key player for his club and country but has not committed to a long-term deal in Germany.

Update #Coman: Bosses are sure that KC wants to extend. But they know that his father, Benoît Menye (family’s friend) & Zahavi are forcing his move to 🏴󠁧󠁢󠁥󠁮󠁧󠁿. A boss from #MUFC told me: "We do not comment on rumors. We have scouts all over the world & Coman is very talented." @SPORT1

And according to German journalist Florian Plettenberg, who is known to be well-sourced, Bayern Munich ‘bosses’ are certain that Coman wants to extend, but is being pushed by his family to pursue a move to England.

Pressed on the claims, a Manchester United source told Plettenberg: “We do not comment on rumours. We have scouts all over the world & Coman is very talented.”

Jadon Sancho is Manchester United’s clear first choice this summer to strengthen their offensive line but clearly, interest in Coman remains should they not be able to sign Sancho this year either.