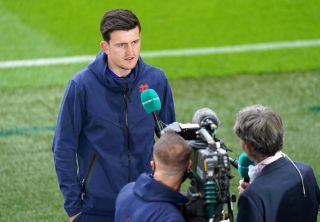 Harry Maguire has been praised as the best English defender in the Premier League by England manager Gareth Southgate. Maguire, who missed England’s first two group games with an ankle injury, returned to the team against the Czech Republic on Tuesday.

The defender has missed the last six weeks of action but is believed to have been in full team training for almost two weeks in a huge boost to England’s chances at this summer’s European Championships.

Gareth Southgate has remained coy over Maguire’s fitness over the course of the tournament but has now praised the Manchester United captain as the best English defender in the Premier League.

“I think he’s been the outstanding English defender in the league this season. He’s been such a bedrock for us,” Southgate said prior to the game, as per the Manchester Evening News.

“This is a good opportunity for Harry to get 90 minutes and we were hoping he would be available for this game and he is.”

With qualification to the next round already secured, Maguire will be hoping to impress the manager again and seal his position next to John Stones for the remainder of the tournament.