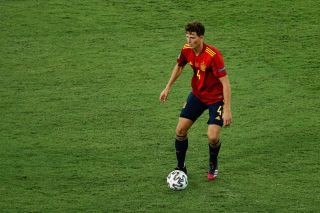 Pau Torres has responded to rumours linking him with a move away from Villareal, as Manchester United reportedly work to bring the defender to Old Trafford. The 24-year-old impressed in Villareal’s win over Solskjaer’s side in the Europa League final last month and has started both of Spain’s games at Euro 2020.

Torres has three years remaining on his contract and reportedly has a €60m release clause in his contract, but he has remained coy over his future and insisted he is still revelling in their Europa League triumph.

“I have a contract at Villareal,” he told Goal. “I just won the first title for the club, we have qualified for the Champions League and it is something that excites me a lot.

“I’m totally calm, right now I am only focused on the European Championship, then the Super Cup (against Chelsea).”

Despite Torres’ calm demeanour, links to Europe’s elite clubs are becoming increasingly prominent in the press and according to reports, Manchester United have been working on a deal to sign him.

That’s according to the Manchester Evening News, who say that the defender has longstanding interest from the Old Trafford club.

Read more: “Regarded as their best” – report claims that Man Utd know who their best goalkeeper is