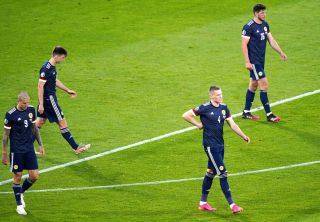 Scott McTominay’s Scotland have been eliminated from this summer’s European Championship’s after losing to Croatia on the final day of fixtures. Meanwhile, England beat the Czech Republic 1-0 to finish top of Group D and secure a round-of-16 tie at Wembley.

Scotland’s tournament got off to the worst possible start just over a week ago when they lost their opening game to the Czech Republic and despite a resilient point earned against England, Steve Clarke’s side crashed out of the competition on Tuesday evening.

This year’s rendition of the European Championships was the first major tournament Scotland have featured in since 1996 and although it ended in heartbreak, there are positives to take out from the campaign.

Englan enjoyed a near-flawless run through the group with the only blip coming in that drab 0-0 draw against Scotland. Southgate’s side won their opener against Croatia 1-0 and finished up with the same score against the Czech Republic to win their group.

Marcus Rashford was introduced as a substitute in all three games, whilst Luke Shaw claimed his left-back spot for the two final games after missing out in the curtain-raiser.

Harry Maguire made his anticipated return from injury against the Czech Republic on Tuesday and will be happy to keep a clean sheet on his comeback. England will now face the team which finishes second in Group F, which consists of France, Hungary, Germany, and Portugal.

Read more: (Video) Luke Shaw nearly gets an assist with delicious through ball