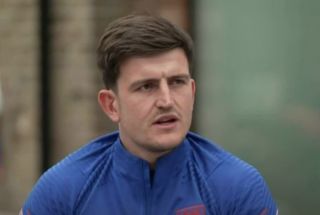 Harry Maguire has been recovering from an ankle injury for over a month and has yet to play at Euro 2020. The defender will be hoping to get some minutes under his belt this evening when England take on the Czech Republic.

England need to beat the Czech Republic to top Group D. Gareth Southgate’s side also sealed qualification to the last 16 of Euro 2020 on Monday night without kicking a ball, thanks to results elsewhere.

The four best third-placed teams from the six groups will progress to the round of 16.

These results also mean Scott McTominay’s Scotland will definitely qualify for the knockout stages if they beat Croatia.

In the video below, Maguire previews England’s game against the Czech Republic and believes England go into the knockout stages of the tournament in a strong position.

They have experienced players like Maguire and Jordan Henderson returning from injury, but just having players like that around the dressing room should rub off on the rest.

We’ll be bringing you updates on the game later if anything noteworthy happens with a United player.