Sweden v Russia was always going to be a slow-burning tactical battle. It was a big victory for the Swedes and we were delighted to see Victor Lindelof play well again and keeping another important clean sheet.

In the end, all that mattered was a penalty and winner from Emil Forsberg – the game won’t be remembered for another incidents, and four points may be enough already to secure Sweden’s passage to the last 16.

For Slovakia, the defeat will hurt as it is an opportunity squandered. They now need at least a draw against Spain in the final group match. “Neither of the teams wanted to open up,” said the Slovakia manager, Stefan Tarkovic, as quoted by The Guardian.

There is something admirable about how Sweden are grinding their way through to the knockouts, with a United defender in the middle of it all, but it doesn’t change my mind about Lindelof starting United games. That’s a totally different ask and I still don’t think he is cut out for it. 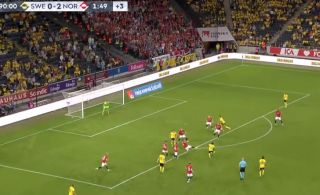 Lindelof reacted to the win over Russia with the most obvious caption.

Keep it up, Victor!